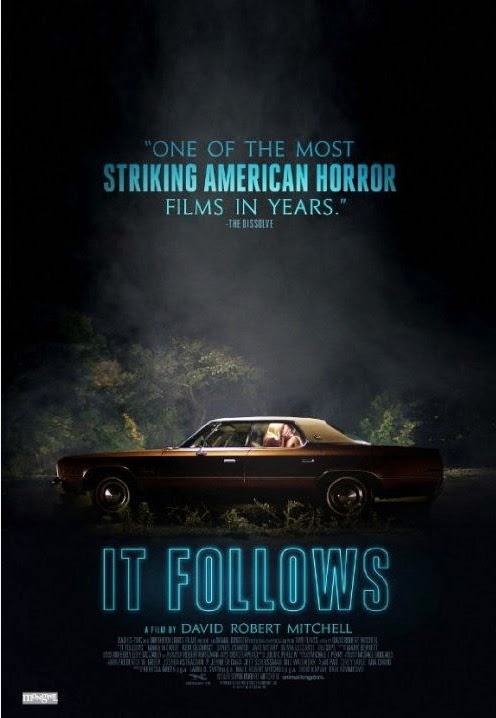 Set to the backdrop of 80's style synths, It Follows is a film that dwells on the innocence of adolescence, the romantic notions of being a teenager and the waking up to the nightmare of the real world. The cinematography of each shot is beautiful, adding to the narrative and provoking alternative meanings. Director David Robert Mitchell has created a film, that along with last years The Babadook, has set the standards high for the horror genre.

The opening scene of soon-to-be cult film It Follows, sets the slow moving eerie tone in to place. The camera lingers on to the terrified face of a young woman, who stares down a street for some time. The mystery surrounding this terror is slowly revealed and forms the basis of the story. Nothing in particular stands out from the acting, but Maika Monroe who plays Jay is convincible as the day dreamy teenager who's world falls apart.

After watching It Follows, you are left with the sense that this film is something special, full of hidden meanings and messages. The more I think about it, the more I'm keen to see a second viewing to decipher each scene. Within the first fifteen minutes I felt as if I was watching a film in the same vein as Richard Kelly's Donnie Darko; deep ambiguous nature, quirky study on adolescence with a 80's feel, courtesy of composer Richard Vreeland.

If I say much more I feel as if I would be giving too much away, It Follows is a film you need to experience for yourself. Unfortunately the film is only showing in select cinemas across the UK; - London: Empire in Leicester Square, Odeon Pandeon St, Vue Westfield Stratford.