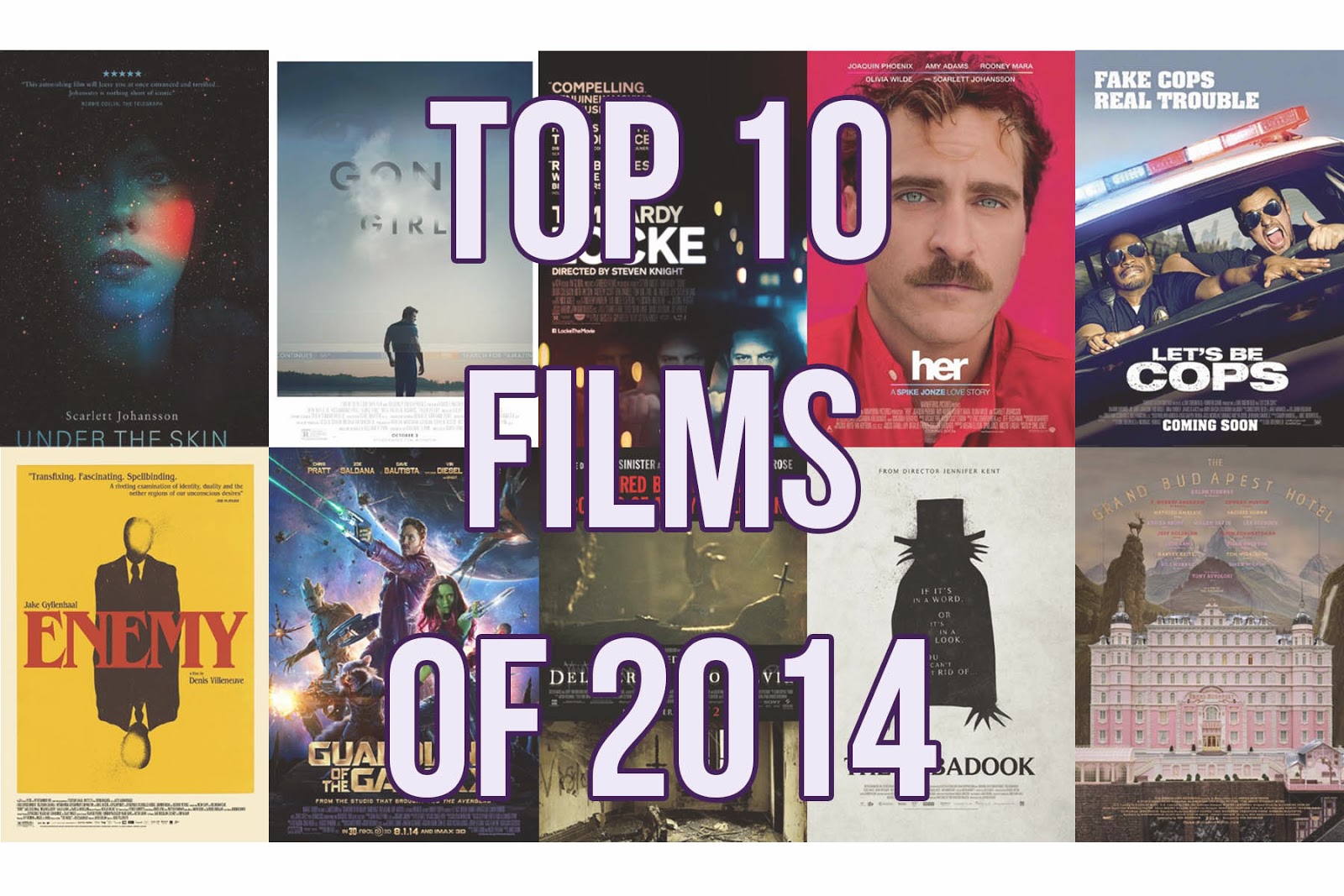 The wonderful 2014 has been an exciting year for film. In particular experimental films that have reached mainstream audiences and have overworked your mind to reach a conclusion (Under The Skin, Enemy). You have to be a certain type of person to like experimental films, someone who thinks outside the box and doesn't say 'I don't get it' when the credits roll. I've always been a fan, so this list is biased and solely based on my own opinion.

I have experienced some truly beautiful cinematography this year, embracing colour and the finer details to tell memorable stories (Her, The Grand Budapest Hotel). I have laughed hard through films that have tickled me in new ways (Guardians of the Galaxy, Let's Be Cops) and have been gripped through twists and turns until the very end (Locke, The Babadook, Gone Girl, Deliver Us From Evil).

I can't say I've seen alot of films released specifically in 2014 but these 10 are my most memorable. However I've yet to see these which are at the top of my must watch list: Interstellar, Birdman, Frank, Sin City: A Dame To Kill For, As Above, So Below, Nymphomaniac: Vol 1&2, Big Eyes, The Theory of Everything and The Double.

My conclusion is that I need to go to the cinema more in 2015 and write more film reviews!

What films have you seen in 2014 that you loved?

If you have any recommendations, I would to know. 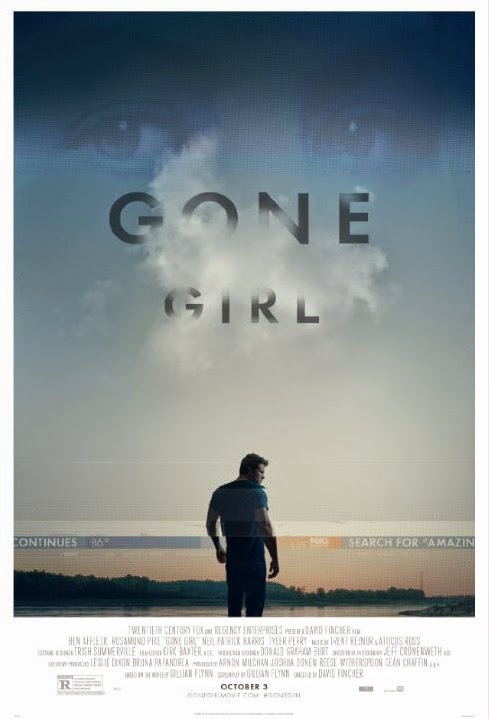 I haven't read the book but everyone was saying how amazing this film is so I had to go see it. I do love a film with a twist! However the twist came to early for me. The first half of the film was brilliant until this twist came half way through and ruined the rest of the film for me. I have only put the film on my list due to the first half, otherwise it wasn't my cup of tea. Don't get me started on the ending either. I haven't ruled out reading the book though; books are always better than their film counterparts. This film had mixed reviews, so you will either love it or hate it.

9
Deliver Us From Evil 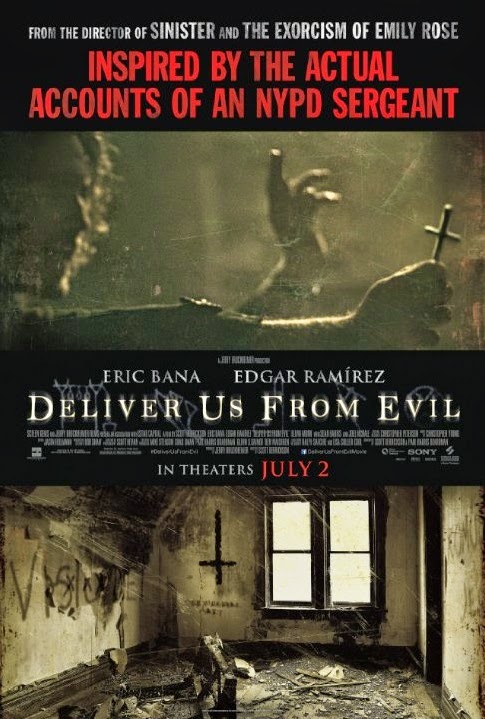 I stepped in to the cinema not expecting much although it's 'based on a true story'. I came out the cinema impressed and wanting more. I love a good horror film and good horrors are hard to come by. I'm not saying Deliver Us From Evil is one of the best, however it gripped me and frightened me that this was a genuine true story taken from the book written by NYPD Ralph Sarchie. I actually bought and read the book after watching the film, which turned out to be an interesting source of information on Sarchie's life and involvement with renown psychic investigators the Warrens. If the paranormal is your thing, I would recommend watching and reading Ralph Sarchie's book. 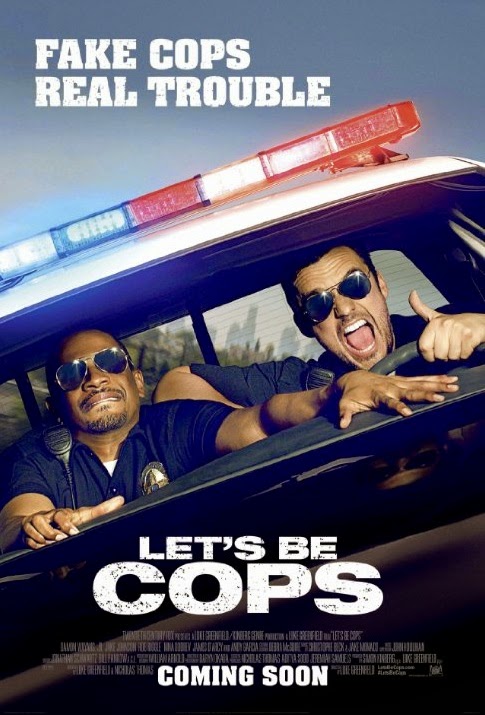 It's not often I find a film that is so genuinely funny, that it makes me cry with laughter in the cinema. Featuring Jake Johnson and Damon Wayans Jnr (both from the TV show New Girl), who both pretend to be police officers for fun. I won't say any more, just watch it!

Guardians of the Galaxy 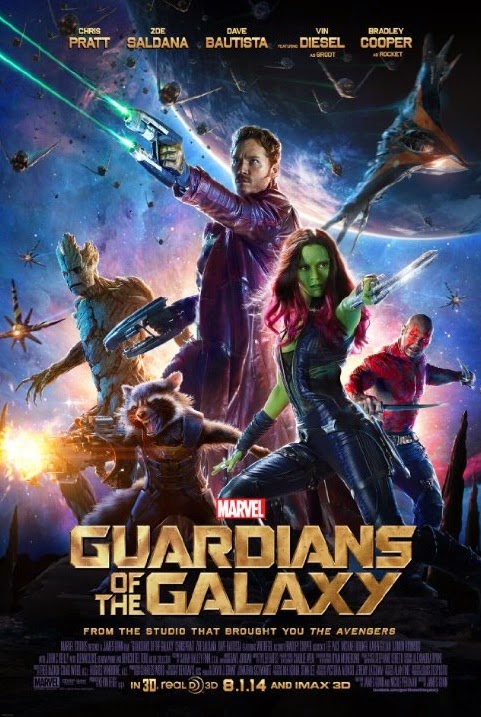 I was lucky enough to have worked in the video promotion of Guardians of the Galaxy, as the agency I was working for did their red carpet event in LA, promotional events, video and press junkets. Therefore I went to the UK première and yes I walked right close by Chris Pratt who was signing autographs! It wasn't a film I would have gone out my way to see, but I'm glad I went to that première, otherwise I would not have known how much I loved it!

Set to vintage soundtrack from the likes of Marvin Gaye, 10CC, The Runaways and Jackson 5 to name a few, the sci-fi adventure for ALL ages provided plenty of comedy, action and cute characters. Who doesn't love Vin Diesel's character Groot?! 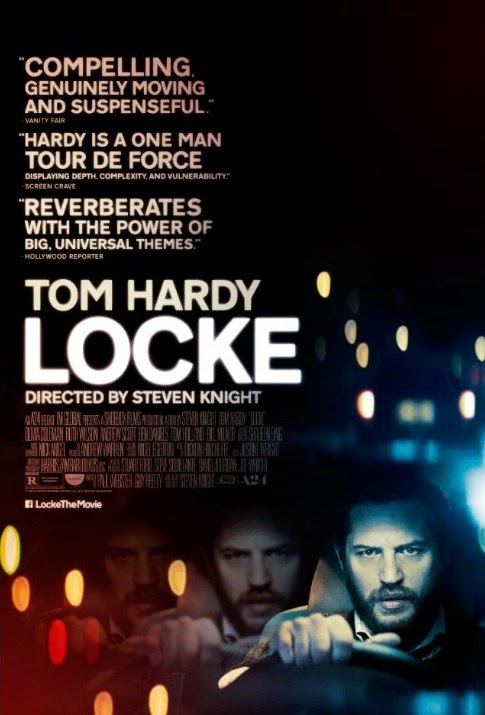 Director Steven Knight proves that simplicity is key to creating a powerful, thrilling drama. A series of phone calls carries the narrative through, alongside simple imagery of a closed in situation. Somewhat claustrophobic, as Tom Hardy's character is driving on the motorway and there's nothing he can physically do to change the matters at hand. Hardy is truely a great actor that shines in every film he has the pleasure of appearing in.

A similar film 'Buried' springs to mind; in terms of restricted imagery and a narration through phone calls. 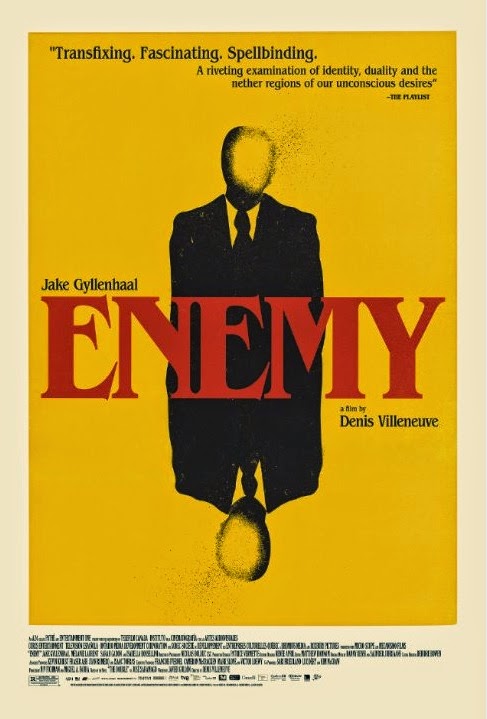 An experimental wonder by director Denis Villeneuve, who has successfully created a sinister atmosphere which is stamped throughout with dark undertones and mysterious narrative. I love Jake Gyllenhaal for making this movie, in my opinion (especially after seeing the trailer for Nightcrawler) he's the next Christian Bale. An actor who can play any role whatever challenging and physically draining, whilst successfully sucking in the audience to emotionally connect which his character. 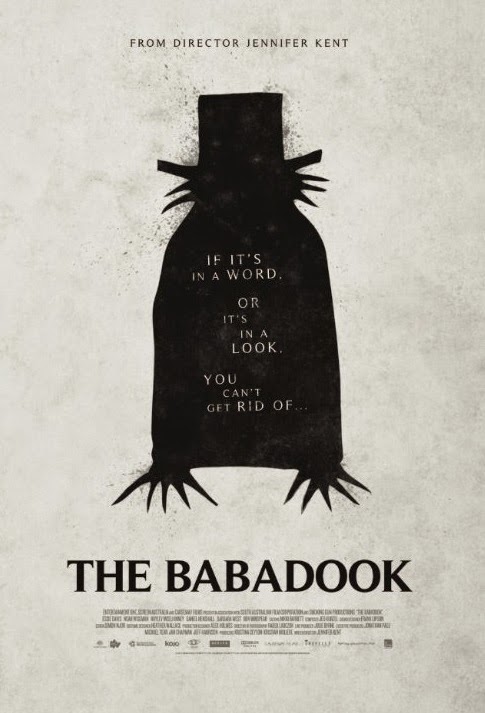 With a slow atmospheric build up and complex character development, The Babadook is one of the best horror films I've ever seen. Australian directer Jennifer Kent has created a film that frightens without the need to reveal too much. Lead actress Essie Davis successfully portrays a mother who is worn out physically and emotionally from the build up stresses in her life. I felt her pain and sympathised with her throughout. If you love a horror, The Babadook should be the next film you watch. 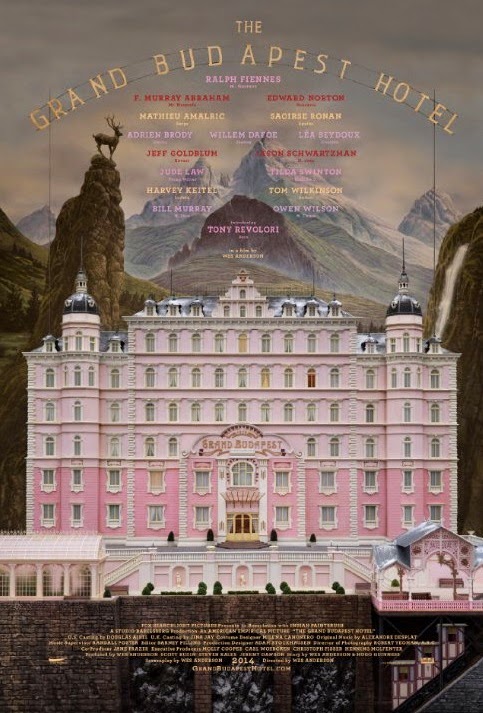 Can Wes Anderson make a terrible film? From the colour to composition, set design, costume, acting to cinematography, The Grand Budapest Hotel is his best yet. 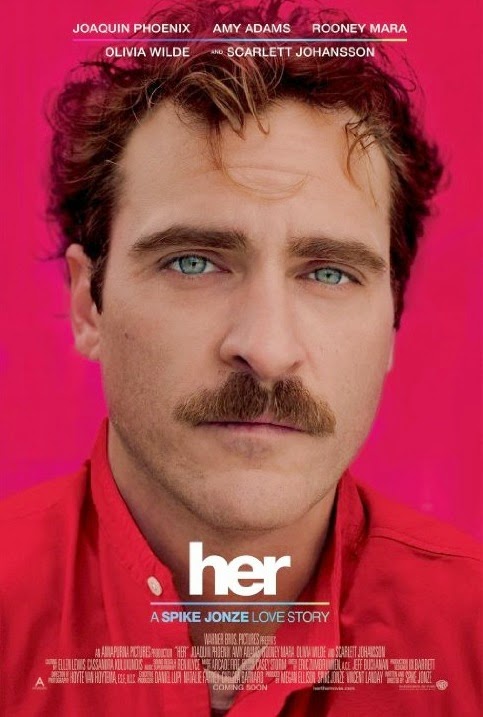 Released in the UK in early 2014, Spike Jonze's Her is full of beautiful cinematography alongside a subtle use of colour to convey human emotion, among a world that relies on technology. Powerful storytelling is playfully mixed together with strong emotion, which is evoked from a love story between man and computer. I really loved this film! 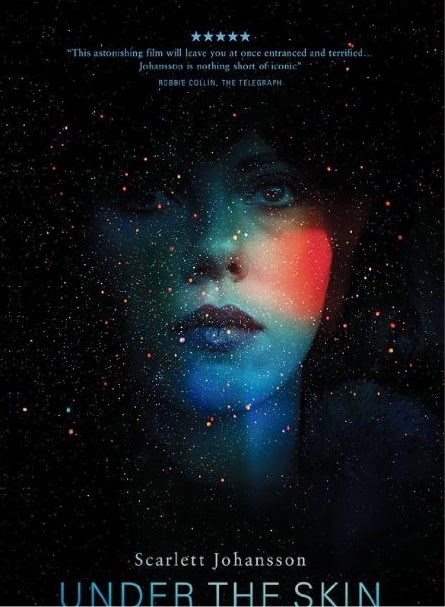 An actress can prove her worth with lack of dialogue by effectively conveying her emotions. Scarlett Johansson proves just that in Under Her Skin. Director Jonathan Glazer has created an eerie experimental film that examines human nature and emotion, through the eyes of an extraterrestrial; and the perfect platform for Johansson to display her skills in something other than a Hollywood blockbuster. The opening scene alone is incredible and worth adding to your must watch list. Under The Skin is my favourite film of 2014 due to the ambiguity of the narration and particular scenes, as well as the beautiful backdrop of the Scottish countryside.