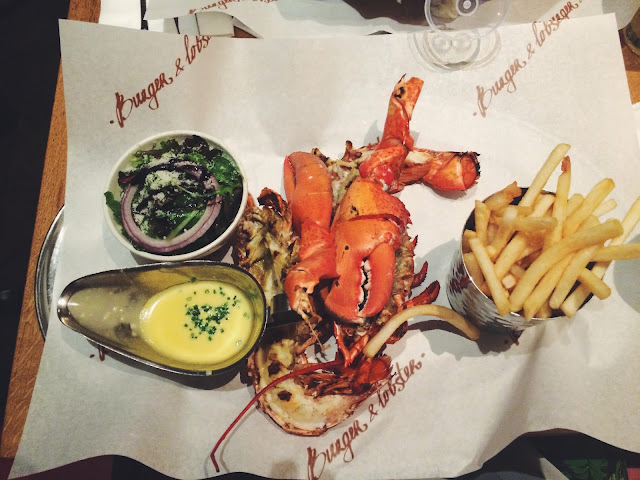 Dining at gourmet fast food restaurant Burger and Lobster has taken a long time to happen. I've been planning on dining here for two years with my friend when we both landed our career jobs. She recently was offered an amazing opportunity meaning we could finally make it to Burger and Lobster!

We chose the Soho restaurant and arrived as early as we could to avoid queing, as bookings are not taken in advance. At the entrance there is a waiting area with lots of tables for people to perch and drink cocktails, whilst waiting for a table in the restaurant. We waited 15 mins before being shown to our table, which isn't bad considering how busy it was.

As we were seated we were given a drinks menu and a bib with the Burger and Lobster logo to tie around our necks. I thought this was adorable! The food menu is not given to you, instead it's shown on the wall near the entrance. The restaurant is known for it's simple, unfussy menu which only has three dishes on the menu: the burger, the lobster roll and the whole lobster. Each costs £20 and arrives with fries and salad.

'The Burger' is a 10oz steak beef burger served plain from the grill or with bacon and / or cheese.

'The Lobster roll' is cold lobster meat dressed in a light Japanese mayonnaise, served in a warm, toasted brioche bun.

The Whole Lobster' A 1.5lb lobster served steamed or steamed and finished on the grill with plain or lemon and garlic butter. 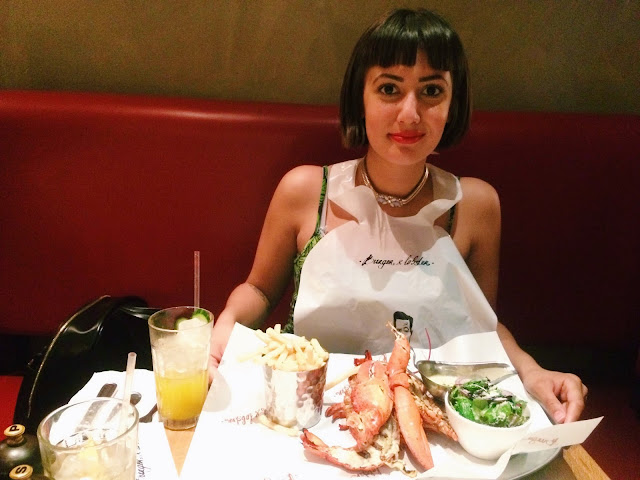 I couldn't resist not having the whole lobster! I chose mine grilled and with lemon and garlic butter, delicious! I've only eaten lobster one other time and this lobster was so tasty and juicy compared to that first time. The lemon and garlic butter was perfect for dipping in lobster meat and fries, but if only there were more of the butter as I finished mine quickly!

The lobster was a good size, with lots of meat and the claws served pre-cracked. There's nothing worst than having to work hard to get in to your dinner! The fries were thin and crisp, a perfect medium size portion, alongside the salad which featured a drizzle of balsamic vinegar and shavings of parmesan.

Overall I was pleasantly satisfied with Burger and Lobster, it's great value for money with outstanding service and delicious food. Next time I've got my eyes on the lobster roll!