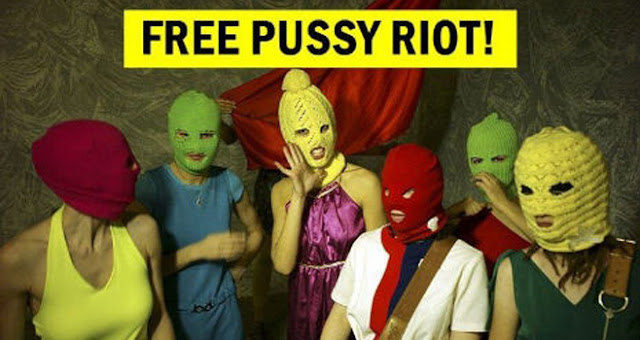 Yesterday was Global Pussy Riot Day and hundreds of thousands of colourful balaclavas filled the streets of cities around the world, to protest against the charges that have been brought upon three members of punk rock band Pussy Riot. The women once arrested, were denied bail and therefore spent six months in prison before the trial started; even being refused to see their young children. Inside the high profile court case in Moscow, Pussy Riot have been charged guilty of hooliganism. The maximum sentence is seven years - a harsh punishment  for a 'crime' that did not cause injury or death. The band performed an anti-Vladimir Putin protest in Moscow cathedral for several minutes before being escorted out by armed police. Maria Alyokhina, Nadezhda Tolokonnikova and Yekaterina Samutsevic were then detained in poor living conditions, sometimes denied the right to food. Maria Alyokhina's statement in court read, 'I thought the church loved all it's children. It turns out the church only loves children who believe in Putin.'

The colourful balaclavas and clothing disguise the identity of the band and enable new members to join and leave at any time. Singer Peaches donned a balaclava in a recent you tube video demanding the band's release and other celebrities such as Danny DeVito, Sir Paul McCartney and Madonna; who is being sued by Russian anti-gay activists for her stance on gay rights within the Soviet Union. The judge ruled that Pussy Riot were found guilty and were given a sentence of two years in prison for hooliganism. Unsurprisingly the band did not win against Putin this time, although backed by the majority of the world next time Putin and his communist state will fall, and fall hard.


This is the performance that caused the arrest of the three women:

Do you think that these actions of standing up for what you truly believe in, deserved the repercussions that have been brought upon these women?


The new single Putin Lights Up The Fires that Pussy Riot have released: