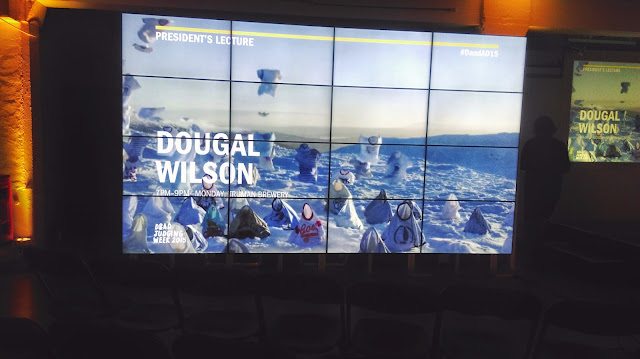 Back in April, I attended D&AD's President Lecture for Dougal Wilson during Judging Week. D&AD are an inspiring community who 'stimulate, enable and award creative excellence in design and advertising'. The President Lecture was held at the Old Truman Brewery just off Brick Lane and is a series of lectures featuring creatives who have excelled within the industry.

Dougal Wilson is a renown music video director known for his unique quirky narratives, such as the non-stop hopping man in 'Happiness' by Goldfrapp, the reckless taxi driver in 'Don't Let Him Waste You're Time' by Jarvis Cocker and the monsters riding bicycles within a dark woodland setting in 'What's a Girl To Do?' by Bat For Lashes. If you haven't seen them Google him right now!

I was massively inspired by music videos whilst at university and Wilson was someone who I admired. I jumped at the chance of experiencing this lecture and I certainly wasn't disappointed. Wilson covered his influences and inspirations, the inner workings of how creative ideas develop and the sketch books behind his most famous music videos and ads. The part I loved the most, was finding out how he became a director and his journey to his current positon as an iconic filmmaker. Wilson's ad work is as important as his music videos, especially his work with John Lewis.

Last Christmas saw the domination of Wilson's 'Monty the Penguin' ad for John Lewis, something I adored and was probably the best Christmas ad of the season. The 'Always a Woman' from John Lewis a few years back is also a memorable one from Wilson, showing the life of a woman from baby to old age. I got to see the test footage of Wilson figuring out how to make each scene work, which was very interesting and alot harder than you think. Another well loved ad Wilson directed was the 'The Pony' from Three, showing a dancing Shetland pony set to Fleetwood Mac.

I'd recommend attending a D&AD President lecture for creative inspiration no matter what industry you're in. Check out some of his advertising and music video portfolio here.