The calibre of design has been pushed to the limit; with some brands honing traditional menswear techniques and other brands reinventing what a modern man should wear. Here are my picks from Paris, London and Milan. 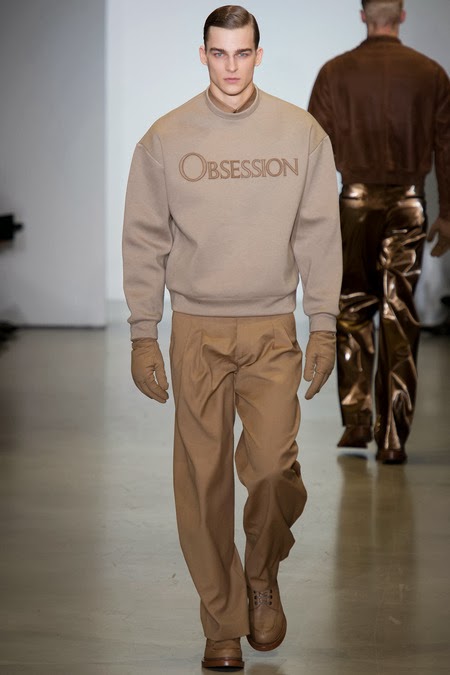 The 90's revival has hit the American fashion house, drawing inspiration from their own style in the 90's. Shown in Milan, the collection of muted colours in camel, navy and brown featured basic pieces; mixing smart and casual to create one of the more instantly wearable collections for the smart commuter. With an emphasise coats, accessories were kept simple with gloves, rucksacks, boots and slicked back hair. The Calvin Klein perfume slogans of the 90's were cleverly emblazoned on sweatshirts and along with metallic pops, which brought the collection to life. The monochrome collection in Milan, featured tailored classics revamped with an injection of rock n' roll. Faces were painted in the style of band KISS and sunglasses added attitude. Mixed textures such as fur, satin and fabrics with sheen played up the bad boy vibe; whilst simple prints and embellishment decorated masculine silhouettes. The embellished cape look above, is reminiscent of film The Crow. KISS joining Varvatos for the bow; how rock n' roll. 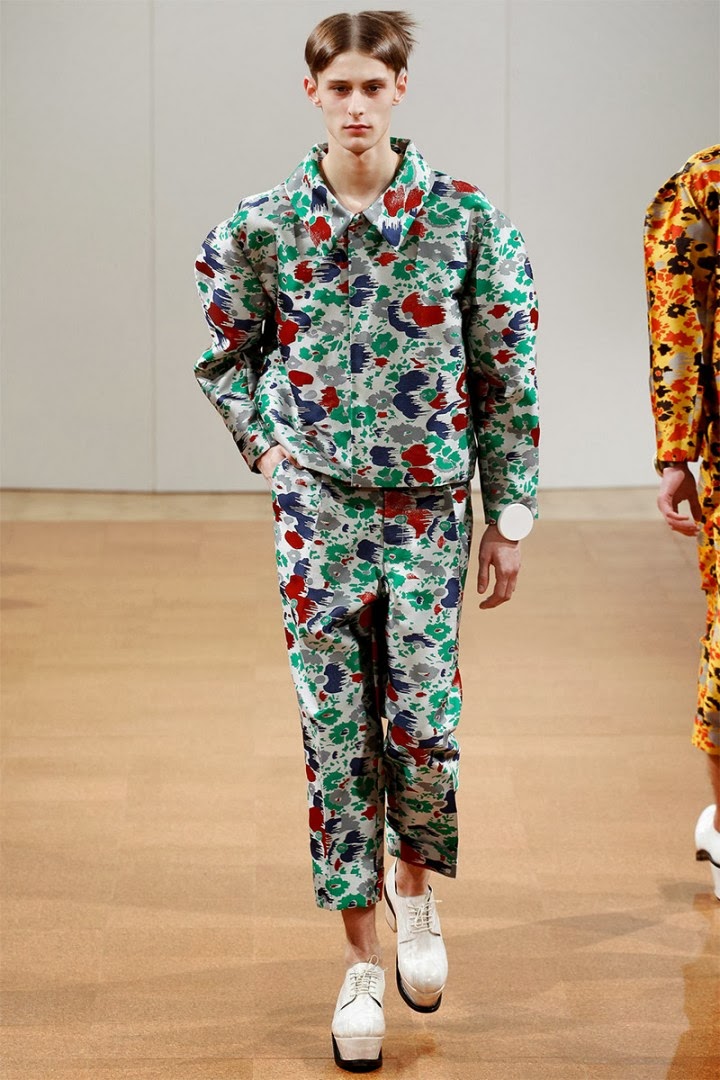 I've always been a fan of Anderson's clothing. Not afraid to push the boundaries of feminine qualities in his designs, the AW14 collection in London is his most ambitious yet. Scrawny models were made up to look like tomboys in elegant forties style looks; featuring jumpsuits, ruffles, draping and low collars. Knitwear included polo necks and oversized panelled jumpers. Two piece tailoring with oversized jackets, exploded with colourful prints. The heels were the stand out piece, with its clunky platform and patent finish. 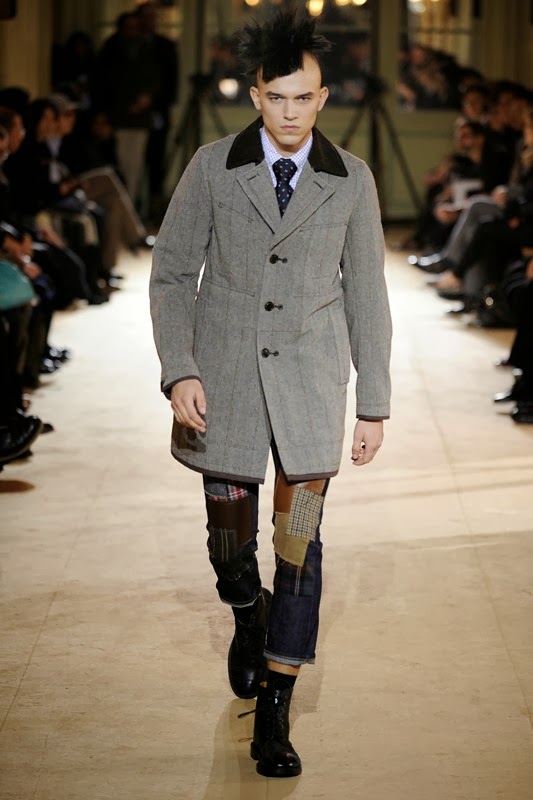 By the look of Watanabe's collection, it was inspired by English working class heritage; with classic tailoring mixed with punk elements of ankle length boots and denim, along with pops of yellow, orange and red. Shown in Paris, the clothes featured denim decorated with patchwork and the models choppy hair resembled the unkept hair of Sid Vicious'; overall giving a hobo vibe. Small bowler hat's were very Clockwork Orange and the tailored pieces featured checks and quilting.

Photo from So So Gay

Sibling have always been a firm favourite of mine, with their unique approach to knitwear design and oversized aesthetic. The ski wear collection shown in London was made for lounging glamorously on the slopes, with oversized crochet and luxurious fur draped around your shoulders. Block coloured clothes were jazzed up with pink and leopard print. Almost as if the models were snow leopards amongst the skiers on the slope. Prints in geometric shapes graced cropped trousers with elasticated hems and belts at the waist held together chunky cardigans. Denim jackets down played the looks, and knitted accessories such as hats and gloves were included for added warmth. Amazing collection for such an individual East London brand, keep up the good work. 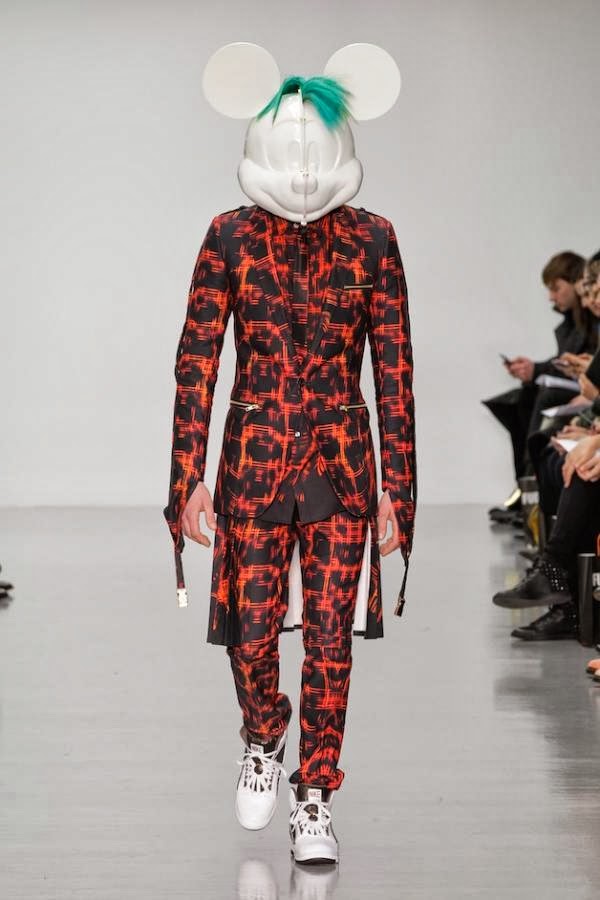 The 'Bi-Polar' collection was shown in London to the backdrop of the Pixies' 'Where Is My Mind', consisting of cheeky pieces with a devil inspired feel. Vivid reds ruled the collections and featured on everything from hair to Mickey mouse heads. Punky details such as harnesses and straight jackets mixed with a mish mash of prints and capes attached to the back, added an air of rebellion. Spooky prints and mickey mouse heads gave an eerie feeling, along with stern looks from the models. Hair was coloured and styled to look like fire; bright yellow, orange and red spiked to resemble fire and horns. A funky touch was included with the bum bag with feathers. A vividly ambitious collection for Autumn / Winter. 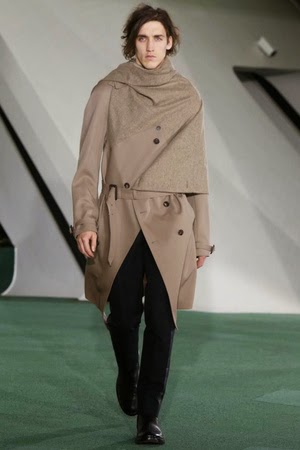 Shoulders were the emphasise of the collection shown in Paris; coats were hung and draped around the upper body and padded shoulders created bold silhouettes. Pea coats added an over sized element, alongside varied textures of fur and vinyl. Heavy boots gave the smart look a slight urban feel and scruffy hair with unbuttoned shirts gave a playful vibe. Trench coats featured multiple straps and

Shown alongside his main collection at LC:M, the collaboration exhibited colourful knitwear, in checked and spotted patterns. Jazzing up the 140 year old brand, who are typically known for their heritage styles, polo shirts and gold eagle logo.