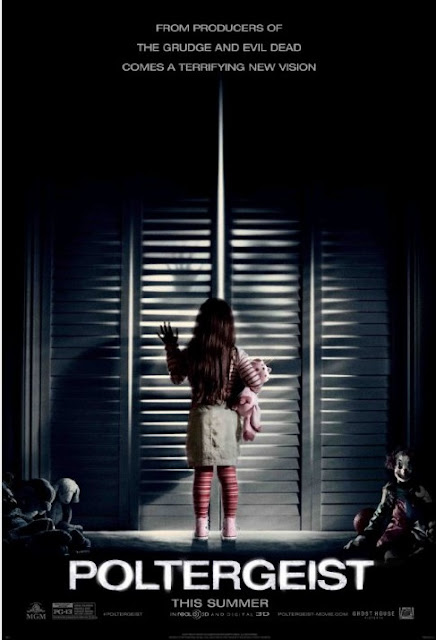 It's been a while since I've written a film review and I have lots to post over the next few weeks! Last weekend I saw Poltergeist at my local Odeon cinema; the reboot of the 1982 horror classic. I expected alot from the remake, since I found the original quite boring. I probably would have been impressed and found it jumpy if I had watched it in 1982! However the original is regarded as a classic and well loved among horror fans.

Poltergeist follows the Bowen family who move in to a new home in a suburban development. From the beginning it's obvious there's something wrong with the house, as the younger Bowen children start to experience spooky incidents. The fictional story was written originally by Steven Spielberg and I don't completely remember the original film so cannot compare how similar the films are; but the iconic scene of the TV is featured where the ghosts communicate with the youngest Bowen through the TV screen. An interesting yet frightening concept that will probably freak you out, next time you're TV / phone / tablet plays up!

Most of the film posters of Poltergeist featured a clown doll which gave me the impression that it would truly be a scary film. Unfortunately it didn't quite live up to the hype. The clown doll scenes were freaky seeing as I have a fear of clowns, however I think it says alot about a horror film when the most jumpy scenes are of a feral squirrel!

Overall Poltergeist fell flat in terms of atmosphere, frights and unpredictability. Memorable horrors build tension and strike the viewer with a powerful bite when least suspected. Poltergeist did neither of these things. The acting was fine but not memorable, the cinematography flowed with one particular scene standing out. A continuous shot of the electronic devices in the Bowen's home lighting up one by one.

Do you plan on seeing Poltergeist? Have you seen the both films? If so what are the similarities between the two?