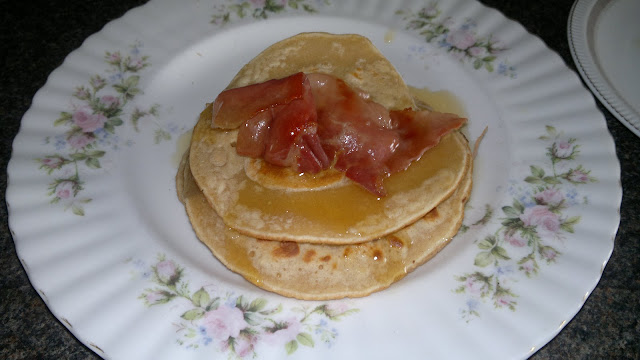 Being a Canadian, I am absolutely obsessed with maple syrup especially on my mum's home made pancakes! I've been making her recipe for years, but recently stumbled across a recipe for gingerbread pancakes with parma ham and maple syrup. Instead of following the exact recipe, I adapted my mum's version to include the spices that give the pancake that familiar gingerbread taste. The recipe also includes parma ham - I was very put off of this idea of mixing savoury with sweet so the first time I made these pancakes, I made a roasted mango and honey sauce to go with it. This time I thought what the hell I'll give it a go. I have to say, it was very lovely yet very different! Give it a try!

Mix all the dry ingredients in a bowl, then add the beaten egg, oil and vanilla extract and mix. Gradually add the milk until the mixture is thick and well combined.

Heat a frying pan on a low to medium heat, wiping the pan with oil coated kitchen paper. Keep this to oil the pan between pancakes, to keep it from sticking.

Add a small to medium blob to the centre of the frying pan and quickly spread outwards in a spiral motion using the back of a spoon.

When the surface of the pancake starts bubbling, its time to flip on to the other side.

Once all of the pancakes have nearly been made, heat another frying pan and add the parma ham. Cook until crispy, then leave for a minute on a piece of kitchen towel to absorb all the fat.